Utah ( abbreviation UT ) with the capital Salt Lake City is a state in the southwest of the USA. With an area of ​​around 219,887 km², it is home to around 2.76 million inhabitants. The name of the state of Utah is derived from the Ute Native American people. Today the Ute Indians still live in Utah.

According to citypopulationreview.com, Utah is nicknamed The Beehive State and Mormon State. This came about because of the many Mormons who live in Utah and have the beehive as a symbol of diligence.

Cities and interesting places in Utah

Monument Valley on the Colorado Plateau in Utah & Arizona

Monument Valley is a plain of graceful rock formations on the Colorado Plateau on the southern Utah-Arizona border. The stone monuments are located in Navajo Nation Monument Valley Park near the town of Mexican Hat, Utah and are administered by the native Navajo Indians.

Because Monument Valley is on Navajo land, the general national park pass – america the beautiful pass does not apply.

The stunning landscape of the Monument Valley valley is approximately 120 km². In the valley are the famous table mountains and buttes.

The massive table mountains (e.g. “Raingod Mesa”, “Thunderbird Mesa”), which consist of the De Chelly Sandstone, rise up to 300 m high above the high plateau of the Colorado Plateau. They are characteristic of the Monument Valley landscape. Millennia of steady erosion and uplift have formed the red sandstone cliffs, sandstone pinnacles and ruins of Monument Valley. Some of the formations like Chiastla Butte have been formed by volcanic activity over the centuries.

In 1958, Monument Valley was established as a Navajo Nation tribal park. The Navajo Indians preserve their traditions, language, handicrafts and way of life here to this day. The Navajo Indians use plants in Monument Valley such as the yucca plant to make their baskets and clothes. But you can also make medicine from the plants and dye your carpets with the plants. They live in small adobe houses (Hogan), if you visit the park you can sometimes see them going about their work.

When visiting Monument Valley you have two options for getting around the park. Either you take a guided tour in a jeep from the locals, but you have to pay extra for them, or you drive through the park in your own vehicle. One should only note that the Navajo Nation Monument Valley Park consists of an unpaved rough road ( Scenic Drive ).

Some of the sights in Monument Valley may only be approached via guided tours. However, the well-known rock formations are located in the generally accessible area of ​​Monument Valley.

The red sandstones are particularly impressive at sunrise and sunset.

Temperatures in Monument Valley vary from −3°C in winter to an average of 30°C in summer. In winter, the valley can also be covered with snow.

Directions & Way to the Monument Valley of the Navajo Indians

You can reach Monument Valley via Highway 163. You can get a glimpse of what awaits you in Monument Valley, as Highway 163 runs as a long straight empty road through the flat desert, directly towards the table mountains.

The associated Visitor Center in Monument Valley and Valley Drive with the most famous views of the Butts are in the state of Arizona. The view from the visitor center extends over the wide plain on which the three mighty mesas are located: West Mitten Butte on the left, Merrick Butte on the right and East Mitten Butte in between. The three mesas are about 1.2 to 2 kilometers apart. The reddish color of the rocks is due to the iron oxide they contain.

From the Visitor Center you enter Monument Valley Park via Valley Drive. The unpaved circular route is about 27 kilometers past the canteens.

The only restrooms in Monument Valley are located in the Visitor Center.

Gouldings Lodge also has a museum with information about the Navajo tribe and documentation of the films made in Monument Valley. The museum is open daily from 8 a.m. to 8 p.m. 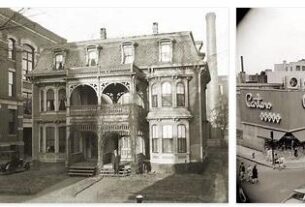 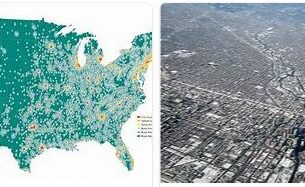