The course of the Mississippi and that of its great Missouri tributary constitute the axis of the mighty system of expanses, mostly flat, which stand between the Appalachians and the Rocky Mountains and which are generally defined globally as Interior Plains (Central Plains). A tectonic basin of continental dimensions (in fact it also continues in Canada, thus pushing itself from the Arctic Ocean to the Gulf of Mexico), it can be considered as a large syncline elongated in a meridian sense. To remain within the USA, the floods of the Mississippi and its tributaries covered the sedimentary formations, essentially Paleozoic and Mesozoic, with a conspicuous contribution of detrital material: it is an immense basin from which the highlands emerge at the edges that prelude the Appalachians to the E (Cumberland etc.), the Rocky Mountains to the W (Ozark, Ouachita etc.). In turn, of course, the Central Plains comprise various sections. There are three fundamental divisions. AN is the so-called Central Lowland, extended around the Great Lakes until it reaches the edges of the Appalachian system to the E, the Missouri Valley to the W; it constitutes a set of undulating plateaus that partly rests on the Canadian shield, the very ancient archaeozoic hoof of North America, which however emerges only in short stretches to the S of Lake Superior (Lake Superior). Next comes the gigantic Mississippi alluvial plain, which is generally made to begin at the point where Ohio flows into the river and ends with the broad crescent of the Gulf of Mexico; extreme southern portion of the Interior Plains, the coastal strip aligns low, alluvial lands, which however rest on more ancient sedimentary layers (Mesozoic and Cenozoic) deposited during the long sea entry towards the interior of the continent. Finally to the W, roughly bounded by the course of the Missouri, the Ozark plateau and the foothills of the Rocky Mountains, is the immense region of the Great Plains, the Great Plains proper, extended in the meridian direction from Mexico to Alaska and high on average from 700 to 1200 m; formerly the land of the boundless prairies (the Prairies), they are destined for cereal cultivation and extensive breeding. It is immediately understood how the morphology of the Central Plains has very different aspects from region to region. It takes on typical fluvial characteristics (more or less recent alluvial deposits, areas of flooding, abandoned meanders, etc.) in the most depressed, southern part, while in the plateaus (Superior Upland) to the W of the Great Lakes also the Mississippi sometimes flows between rocky banks; very special landscape, in ravines, form the Badlands of South Dakota (South Dakota). The soils also vary from S to N: the alluvial soils in the southern section are followed by aeolian soils in the northern section; approaching Canada, glacial morphologies and their deposits appear moraines (typical drumlins). United States is a country located in North America according to A2ZGOV.COM.

The last major structural element of the US territory is represented by the chains, from the Cenozoic era, which in double alignment, separated by a marked depression, dominate the Pacific facade; developed from Alaska to Mexico, they represent perhaps the most extraordinary morphological element in North America, touching among other things in the Alaskan Mount Denali (previously called McKinley, 6194 m), the highest peak of the subcontinent and hosting the only volcanoes still active. The innermost alignment, better marked and more imposing, includes the Sierra Nevada in the United States at the S, to the N the Cascade Range, which forms its continuation. In both chains there is a basement of ancient, crystalline rocks, on which, however, in the Cascade Range large volcanic systems of Cenozoic origin (which, in Mount Rainier, touch 4392 m) and large lava surfaces, while in the Sierra Nevada the sedimentary covers of the Paleozoic and Mesozoic prevail. They have a generally very steep escarpment towards the E, especially the Sierra Nevada, which with a sudden jump overhangs the sandy surfaces of the Great Basin: from Mount Whitney (4418 m, highest peak in the USA, excluding Alaska) in just 100 km falls to the mentioned depression of the Valley of Death, with a leap of over 4500 meters. The raising of the two chains led to the sinking of a long strip to the W of the same and precisely of the valley crossed by the Willamette river to the N and of the one crossed by the Sacramento and San Joaquin rivers to the S: the latter, better known as the Valley of the California (or simply the Valley, or The Valley), is one of the most characteristic and marked tectonic depressions in the world, closed all around by high mountain ridges and whose only natural access is represented by the splendid San Francisco bay. The outermost alignment forms the real Coastal Range (Coast Ranges), less elevated, particularly in the southern part, while it reaches 2428 m in Mount Olympus near the border with Canada; the chain dominates, as the name implies, directly the coast, determining the rocky morphology but not very jagged, given the very course of the relief: in practice, in fact, the compactness of the coast gives way only to the estuary of the Columbia River, in the far north, and to the aforementioned magnificent recess of San Francisco, due to a recent phenomenon of marine submersion, as the sea managed to overcome the modest hills of the Coastal Range. 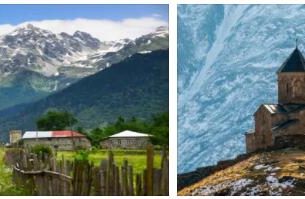