However, it should be noted that according to estimates of January 1946, the population would then have been 22,752,000 residents

The newly created factories, which arose during the last war, mainly concern the chemical-pharmaceutical sector (plant for fertilizers in S. Luis Potosí), rubber and soap.

Commerce. – Trade is represented for the last few years by the following figures (in millions of gold pesos):

As can be seen, Mexico’s foreign trade has been in deficit since 1944.

Finance. – The figures of the financial statements are shown below:

At December 31, 1947 the internal public debt amounted to 1679 million, of which 1483 in consolidated, the foreign one amounted to 312. In the last years of war the strong surplus of the balance of payments, in addition to allowing the country to redeem part of foreign investments in domestic industries, it significantly increased the gold reserves of the Bank of Mexico, which went from 161 to 1418 million pesos between December 1939 and December 1945. The large import surpluses which occurred starting from 1946 significantly affected these reserves, causing them to drop to 342 million pesos in June 1948 and making it necessary to apply a rigid system of import licenses and increase customs tariffs..

In November 1941 the peso was pegged to the dollar on the basis of 4,855 pesos per dollar. An agreement with the United States helped to keep this exchange rate unchanged, under which the United States Stabilization Fund was authorized to buy Mexican pesos for an equivalent value of 50 million dollars. In correspondence with the aforementioned exchange rate, the gold parity of the weight of gr. 0,183042 of fine. Negotiations have recently begun with the Fund for the modification of the aforementioned parity; as a result, the Bank of Mexico suspended trading at the official exchange rate in July 1948 and was authorized to use the free exchange rate (October 1948 = approximately 6.90 pesos per dollar).

In 1941 the Bank of Mexico was endowed with a new organic law, which accentuated its public character with broad powers of intervention in the monetary and credit fields. As of April 30, 1948, circulation rose to 1,738 million (December 1939 = 602 million) and sight bank deposits to 1,773 million.

After the triumph of the revolution, David Alfaro Siqueiros (born in 1898) worked alongside Diego Rivera and Clemente Orozco, directing the periodical El machete and painting in fresco and encaustic on the walls of public buildings (e.g. the famous Burial of a worker, unfinished, of the Escuela Preparatoria of Mexico, 1922). Later Siqueiros adopted the procedure al duco (ie with the airbrush) for mural painting, declaring the methods used up to then antiquated and arguing with Rivera (1934).

Apart from a definitive artistic judgment on Siqueiros’ painting, the personality of this tireless and combative revolutionary worthily completes the triad of the great Mexican “social” painters, although among them we can now recognize Orozco (or at least in his first period) the figure more poetic and obscurely dramatic and powerful of the group (eg the Zapatistas of the Museum of Modern Art in New York, to name just one of the best known paintings).

For some years (c. 1934), after the decorations at the Abelardo Rodríguez market and in the suburban schools of Mexico, the period of the great murals has ceased and an easel painting with a more intimate character has begun to take over and, in some cases, even Europeanizing, such as for example. in the abstract artist Carlos Mérida (born in 1893); although the vast majority of artists always adopt a descriptive realism, stylized according to airy formulas, pre-Columbian art and its popular offshoots, present above all in an obscure cult of the macabre, ranging from sugar skulls that are sold at parties, to calaveras which adorn the periodicals and popular woodcuts. Among these artists we should mention Francisco Goitia (born in 1884), Manuel Rodríguez Lozano (born in 1896), Roberto Montenegro (born in 1885) and, among the sculptors, Mardonio Magaña (born in 1863) and Luís Ortíz Monasterio (born in 1906). Among the youngest must be remembered Frida-Kahlo (born in 1910), wife of Rivera, with surrealist tendencies, Jesús Guerrero Galván (born in 1910), Miguel Covarrubias (born in ig04), José Chávez Morado (born in 1909), and, among the engravers, Isidoro Ocampo (born in 1910), Francisco Dosamantes (born in 1911) and Jesús Escobedo (born in 1917). Of all, however, the one who best managed to render the mysterious and barbaric sense of a very ancient race with formal means that have little to envy to the pictorial freedom of a Picasso is Rufino Tamayo (born in 1899: Animals, 1941; The flutist, 1944). 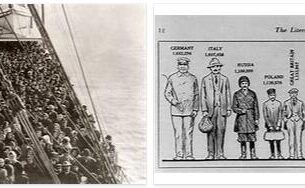 The First Population in United States