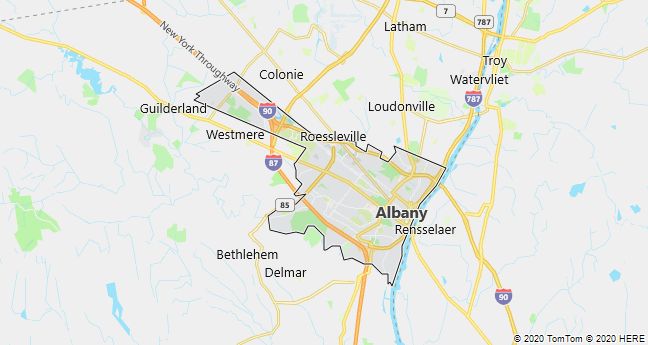 Albany (New York), capital of the state of New York, USA; 98,000 residents (2010). The town was built in 1614 as a Dutch trading post (fur trade), but did not get its name until after the English conquest in 1664. In 1754, the Albany Congress was held, which dealt with co-operation between the British colonies and concluded agreements with the Iroquois on the war against France. In 1797, the city took over the function as the state capital after New York. The location on the Hudson River became particularly significant after the opening of the Erie Canal in 1825 and the construction of the deep-water port in 1932 – a transhipment site for ocean-going ships between the Atlantic Ocean and The Great Lakes.

Albany has a diverse industry and a large service sector, dominated by the state administration with 112,500 employees (1988). After renovation in the 1960’s, the city center is characterized by modern high-rise buildings.

Jamaica Bay, shallow bay on the southwest coast of Long Island in New York, USA. The bay and its many small islands, which together form a 50 km2 nature reserve, are spring and autumn habitats for many migratory birds. The Rockaway isthmus, which borders the bay towards the Atlantic Ocean, has fine beaches and a state park, Jacob Riis Park, named after the Danish-American photographer and journalist Jacob A. Riis. 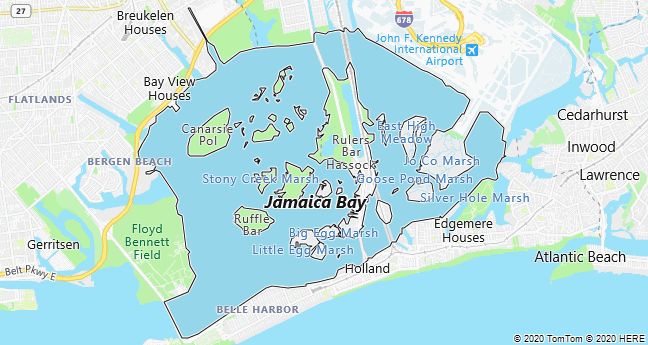 Lake Placid, tourist town 600 m above sea level in the Adirondack Mountains in the northeastern part of the state of New York, USA; 2638 residents (2000). The place attracts visitors all year round, but is especially a major tourist destination in the winter (skiing). The 1932 and 1980 Winter Olympics were held here. 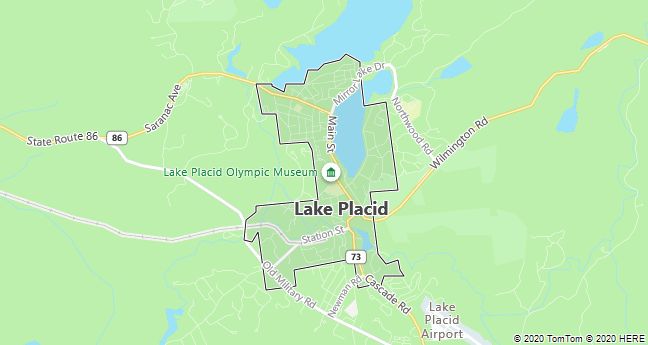 Cooperstown, city in central New York State, USA; 1852 residents (2010). A favorite tourist destination associated with “Native American author” James Fenimore Cooper, whose father founded the city in the 1780’s. Today, however, most American tourists make a pilgrimage to the National Baseball Hall of Fame and Museum, and the game is said to have been invented here in 1839. 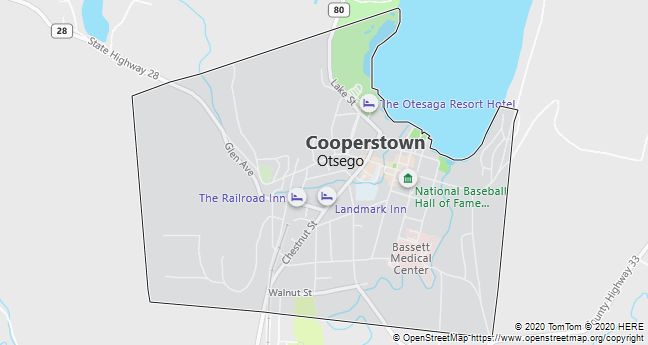 Buffalo, a port city on the eastern end of Lake Erie in the state of New York, USA; 261,300 residents (2010). After the opening of the Erie Canal in 1825 between New York City and Buffalo and later as a hub for rail traffic between East and West, Buffalo soon became an important trading and industrial city (steel, chemicals, grain, etc.). 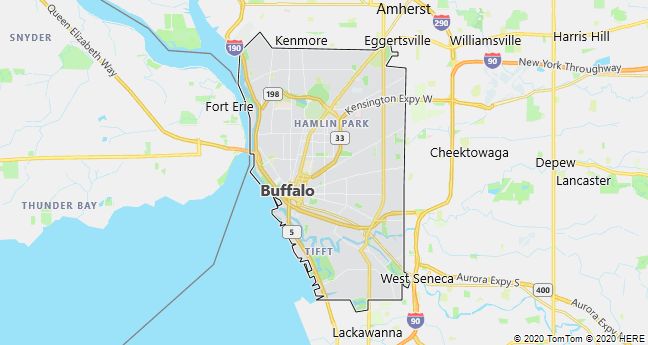 After World War II, the crisis in heavy industry led to factory closures and job losses, which new research-heavy industries – electronics, nuclear power, aerospace – have not been able to replace. Since 1950, the population decreased by 1/4 million. One of America’s best collections of American and European contemporary art can be found in the Albright-Knox Art Gallery.

Rochester (New York), a port city on Lake Ontario in the state of New York, USA; 210,600 residents (2010). The city has a significant port turnover and a large and versatile industry. Here is the headquarters of the Eastman Kodak Company and branches of Bausch & Lomb, Xerox and other worldwide high tech companies. The University of Rochester is home to the prestigious Eastman School of Music. Rochester, founded in 1817, experienced rapid growth after the completion of the Erie Canal in 1825.

It was in Palmyra near Rochester that Joseph Smith founded the Mormon Church after, according to his own account, he found four gold plates with a New Testament in 1827. 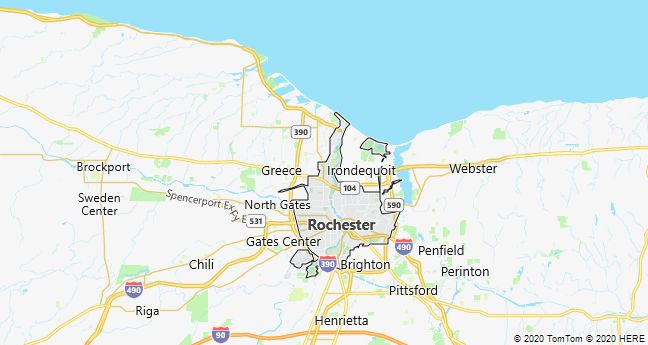 Syracuse, a city in New York, USA, midway between Albany and Buffalo; 145,200 residents (2010). After the opening of the Eriekanalen in 1825, the city ​​became an important trade and industrial center with a large salt production, but since World War II it has been characterized by factory closures and emigration. Leading education is Syracuse University with 18,500 students, while the Erie Canal Museum is one of the city’s few sights. The New York State Fair has been held here since 1841. 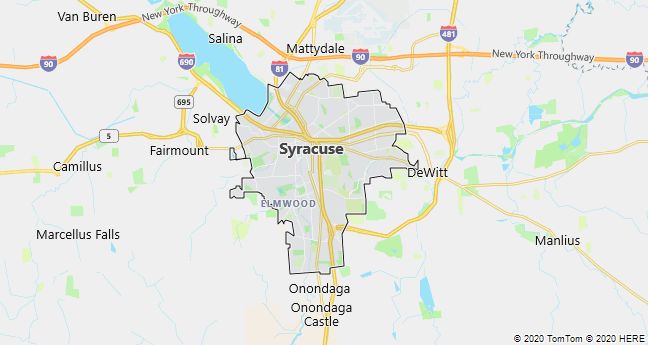 Ithaca, a town on Cayuga Lake in the state of New York, USA; 30,000 residents (2010). It is known for Cornell University (1865) and Ithaca College (1892) and with its picturesque location at the foot of the Allegheny Mountains is a well-visited tourist town. 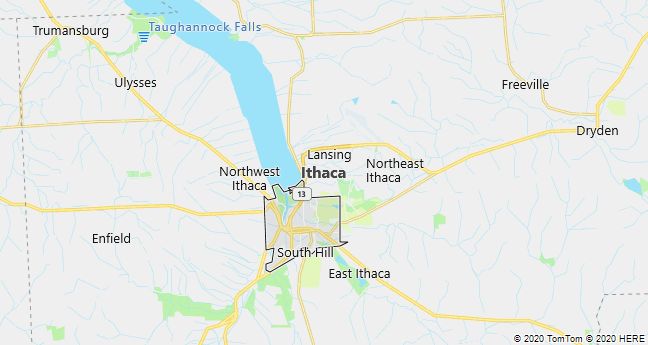 Schenectady, a town on the Mohawk River in the state of New York, USA; 66,100 residents (2010). The city, founded in 1661, is a significant industrial center with a large division of General Electric Company. Together with the neighboring towns of Albany and Troy, it is part of the Capital Region with a total population of 851,000 (2000). 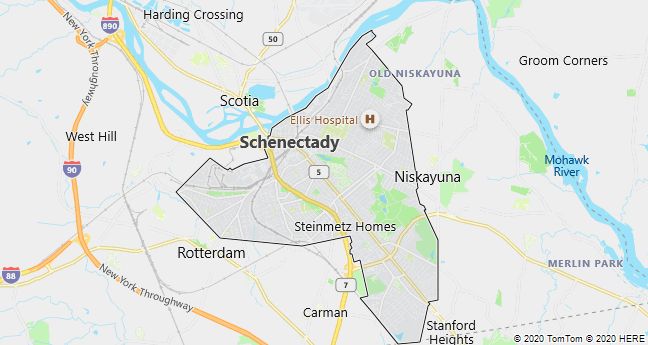 John F. Kennedy International Airport, JFK, the largest airport in New York City and one of the world’s busiest, located 24 km SE of Manhattan in the Queens district of Long Island; laid out as Idlewild Airport 1942-48. The airport area includes the International Arrival Building, which is flanked by eight circular passenger terminals for large private airlines.

The TWA terminal was built in 1958-62 by the architect Eero Saarinen. Its roof is built of four large concrete vaults and is supported by Y-shaped columns. The interplay between convex and concave shapes evokes an aerodynamic line play, and the terminal was, in the architect’s own words, intended as an abstraction of “the drama and excitement of traveling”. The building represents the so-called plastic style of post-war architecture. 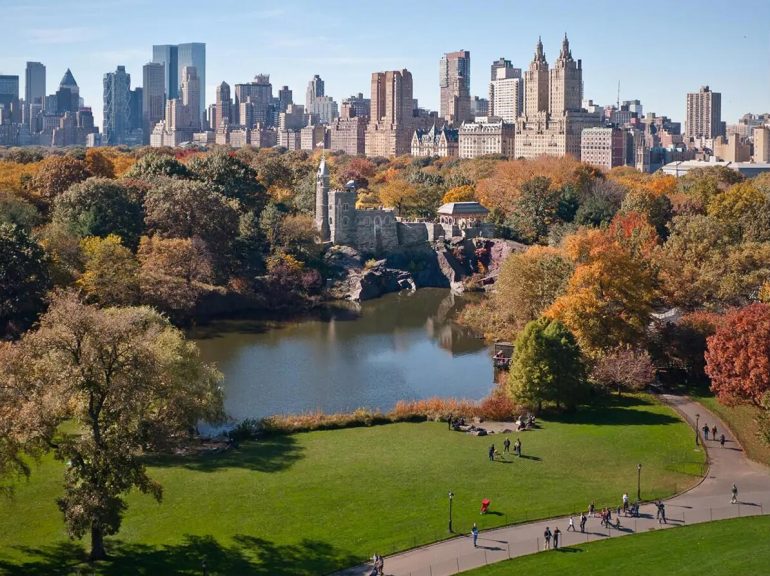 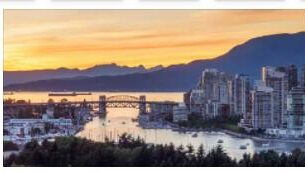 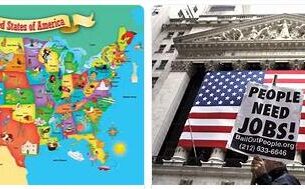 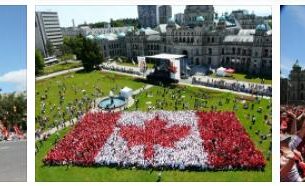