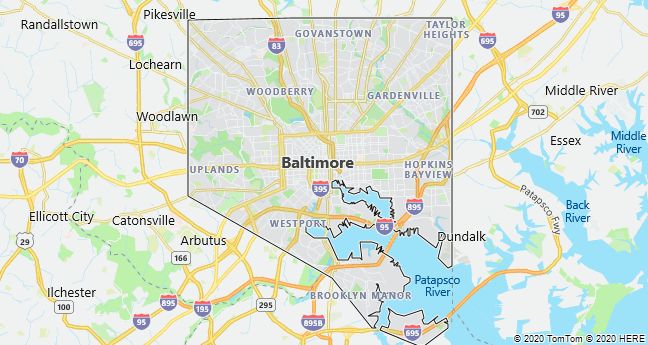 Baltimore, a port city on the Chesapeake Bay in Maryland, USA; 621,000 residents (2010), of which 64% are black. Baltimore has a compact city center with historic neighborhoods and buildings; however, almost all were rebuilt after a major fire in 1904. Especially along the harbor are many industries, several of which were founded during the two world wars: shipyards, steelworks, refineries, aircraft and car factories, etc. Later, the city has attracted high-tech companies. by virtue of the reputed Johns Hopkins University (especially biotechnology). Following extensive renovations, The Harbor Place is the city’s most attractive shopping and entertainment area. Through the 1990’s, the city lost 50,000 jobs and 85,000 residents. Against this background, the city council launched a large-scale development project in 2000, The Digital Harbor, which, through investments in infrastructure and housing along the waterfront, will attract new companies and well-paid taxpayers. Among the city’s many memorials and museums are the 49 m high Washington Monument (1829) and the B&O Railroad Museum on the first US railway line. 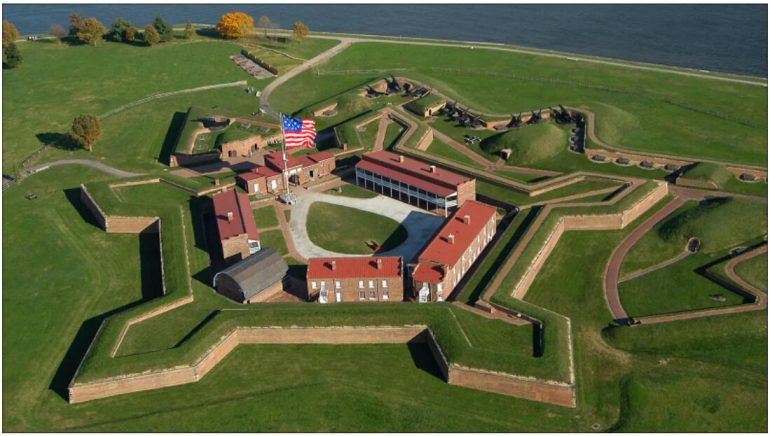 Baltimore was built in 1729 as a shipping port for wheat and tobacco from Pennsylvania and Maryland. Extensive trade with Europe on ships known as the Baltimore Clippers, as well as trade with slaves from the Caribbean, made Baltimore an economic and political center on the border between the Northern and Southern States in the 1700’s and 1800’s. The completion of the Erie Canal (1825), which connected the Great Lakes with New York via the Hudson River, gave New York merchants an advantage in competition with Baltimore. This contributed to the commencement of the United States’ first passenger and freight railroad, the Baltimore and Ohio Railroad, in 1828 at the initiative of merchants in Baltimore. The city is named after the English barons of Baltimore, who in the 1600’s. founded the colony of Maryland.

Frederick, town in Maryland, USA, approximately 70 km west of Baltimore; 65,200 residents (2010). From the original village, founded by German immigrants in 1745, there are well-preserved farms; in addition, the city is known for the nearby country house for American presidents, Camp David. 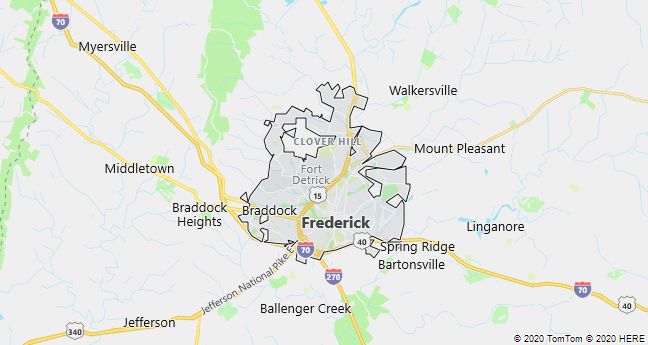 Annapolis, the capital of Maryland, USA; 38,400 residents, of which 26% are black (2010). The city houses beautiful old buildings dating from the city’s founding in the 1600’s, including St. John’s College (1696), which was built near the site where the settlers made peace with the Susquehannock Indians in 1652.

Annapolis was an important port and fishing town (catching oysters and crabs) at the mouth of the River Severn in the Chesapeake Bay, but is best known for the US Naval Academy, which has characterized the city since its inception in 1845. 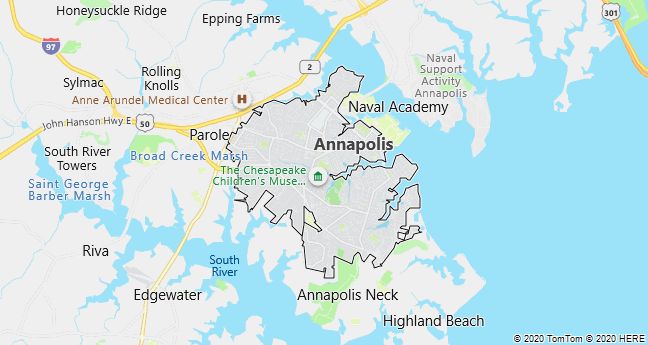 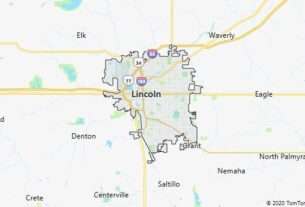