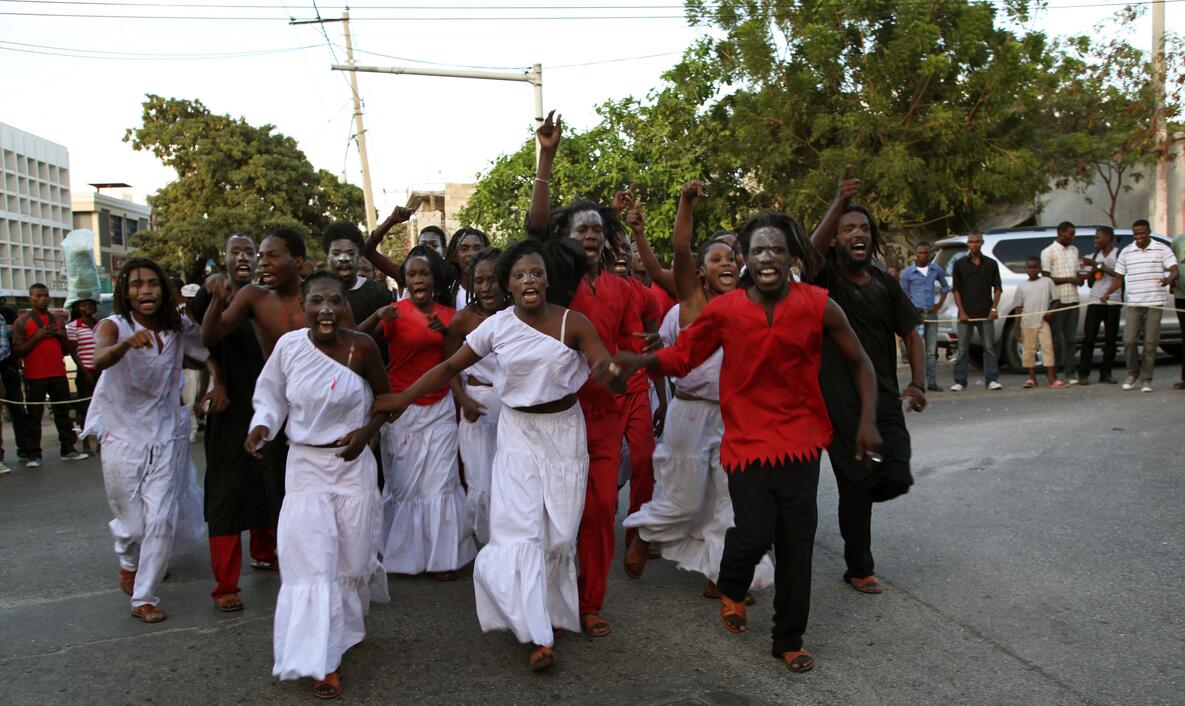 Haiti is a republic in the Caribbean, and constitutes the western third of the island of Hispaniola that is shared with the Dominican Republic. The country is the most mountainous in the Caribbean, the capital is Port-au-Prince. The population, unlike neighboring countries, is mainly of African origin and is Creole and French speaking. Creole is the language spoken in the streets and among most people, while French is widely used in education, politics and the media. The country is among the poorest in the world with little developed business.

After the French Revolution, in 1804, Haiti declared itself independent of France. Political chaos has characterized the country for almost its entire history. Dictators François Duvalier (“Papa Doc”) and Jean-Claude Duvalier (“Baby Doc”) ruled the country during the periods 1957–1971 and 1971–1986 respectively. An initial democratization process was interrupted by a military coup in 1991. Civilian rule was restored in 1994 following intense pressure from the UN and the United States. A new coup attempt was struck in 2001, and in 2004 President Jean-Bertrand Aristide was forced to step down.

The United States has on several occasions been involved in military intervention in the country, most recently in 1994 during Operation “Democracy Democracy”. Since 2004, the UN force MINUSTAH ( Mission of Nations Units for Stabilization in Haiti ) has been deployed in Haiti. They will, according to their own mandate, contribute to stabilization, security and democratization in Haiti. However, MINUSTAH has also faced heavy criticism, and has been blamed for both the abuse of the civilian population and the introduction of cholera into the country.

Haiti is a very mountainous country, with four limestone mountain ranges extending through the country. At the far north lies the Massif du Nord, which extends east into the Dominican Republic, where it is called Cordillera Central. South of the Massif du Nord are the smaller chains of Montagnes Noires and Chaînes des Matheaux, and to the south lies the Massif du Sud, with the country’s highest mountain Pic la Selle (2674 meters above sea level). Between the mountain ranges are small lowland areas and recesses, including the fertile Artibonite Valley, which is a very important agricultural area. 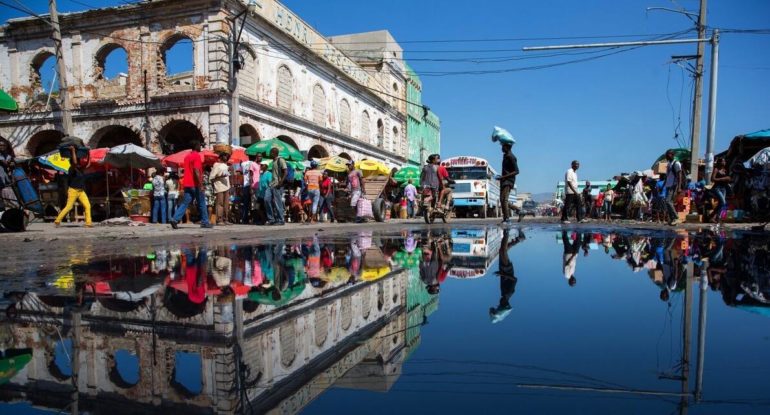 Mangrove forest grows along parts of the coast. It used to be rainforest in the north, but most of it is cut down. It is savannah to the south and in the inland valleys.

Haiti is located on the border between the Caribbean plate and the North American plate, and is very prone to earthquakes. In January 2010, Haiti was hit by a powerful earthquake with epicenter in Léogâne west of the capital Port-au-Prince. The quake was measured at 7.0 on Richter’s scale and caused major damage. In the time after the main earthquake, 45 aftershocks occurred. An estimated 200,000 were killed and 300,000 injured. Around one million became homeless, and three million became directly dependent on emergency relief from the earthquake. The material damage was enormous.

Haiti’s population is estimated at approximately 10.8 million (2018). Most of the population are descendants of African slaves. The rest is mainly of European / mixed origin, and constitutes the economic and political elite of a country with great social differences. 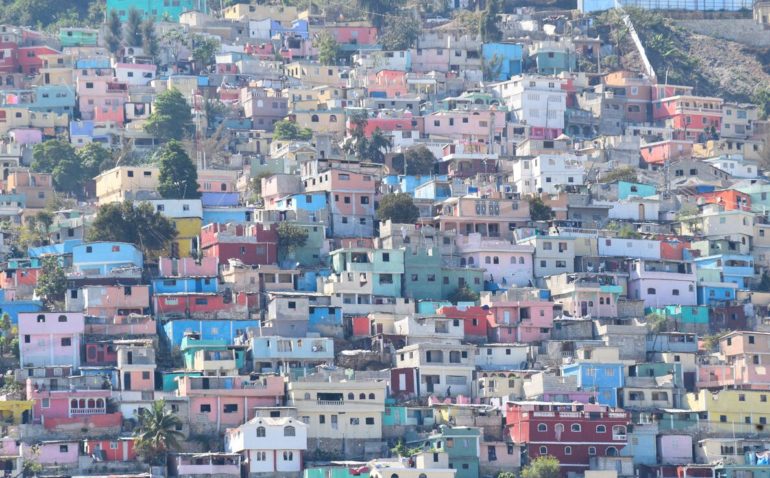 The population density is very high. Large poverty in the countryside has contributed to many having traveled to the big cities. Many have also emigrated to the United States and the Dominican Republic. The largest city is the capital Port-au-Prince, with a population estimated at just over 2.6 million in 2018. Cap-Haiti in the north counts about 250,000 inhabitants.

The majority of the population are Christians, who make up about 68.5 percent, and around 24 percent are Protestants. About 75 percent also practice voodoo, a traditional, popular form of religion based on elements of West African religions and Catholicism.

More than 90 per cent have Creole as their mother tongue, the rest are bilingual. From 1987, Haitian Creole has been the official language along with French.

The regime in Haiti is very unstable, and is characterized by constant military interventions and authoritarian presidential policies, not least under father and son François Duvalier (“Papa Doc”) and Jean-Claude Duvalier (“Baby Doc”) who ruled the country with iron hand from 1957 to 1986. The repressive regime under father and son Duvalier was based, among other things, on Tonton Macoutes, the president’s private security force.

According to the country’s 1987 constitution, adopted after the fall of the Duvalier regime, Haiti is a democratic republic, with the right to vote for anyone over the age of 18. The board is based on the principle of distribution of power between a popularly elected national assembly, a president-elect, a prime minister and a government, and the courts. The National Assembly includes two chambers, a Chamber of Deputies and a Senate. The president is elected for five years.

Before Christopher Columbus arrived at Hispaniola in 1492, the island was inhabited by around half a million taino Arawak -indianere. These were used as slaves on sugar plantations and almost exterminated by Spain over 50 years. From 1512 a large number of African slaves were introduced, but the Spaniards found little interest in the western part of the island, and control of the part that would later become Haiti was taken over by France in 1697.

The slaves were extremely brutally exploited by the plantation owners, and in 1791, in the wake of the French Revolution of 1789, over 100,000 slaves revolted, claiming to be free citizens. Under the leadership of Toussaint Louverture (1743-1803) they fought a fierce battle, and in 1801 the rebels controlled the entire island. Napoleon intervened, and Louverture was taken into French captivity. But the slave rebellion succeeded, and in 1804 the rebels under the leadership of Jean-Jacques Dessaline could declare independence for Haiti.

France first recognized its independence in 1825, against the fact that Haiti, under the threat of military intervention, paid the plantation owners 150 million francs in compensation. The amount was reduced to 90 million francs in 1838, and contributed to the heavy debt of Haiti.

Throughout the 19th century, Haiti was characterized by political chaos, and social differences increased. For a period from 1820, the island was united, before a riot in Santo Domingo in 1843 led to a new divide between Haiti and the Dominican Republic. From 1843 to 1915, 22 dictators ruled Haiti. From 1915 to 1934, Haiti was occupied by the United States. The time that followed was characterized by interventions, coups and long periods of dictatorship, including father and son Duvalier (1957–1986).

In December 1990, the first free elections in Haiti’s history were held. It was won by the priest Jean-Bertrand Aristide, who with much support from the country’s poor got 70 percent of the vote. Already in September 1991 he was deposed in a military coup. Aristide fled to the United States in exile, while the Organization of American States (OAS) and the United States imposed sanctions on Haiti. In 1994, a UN force under US leadership entered the country. Soon after, Aristide was reinstated. In 1996, former Prime Minister René Preval took over. In December 2000, Aristide was again elected president, before being deposed in a coup in 2004.

Haiti is the poorest country in the Western Hemisphere. Even before the violent earthquake in 2010, the country was completely dependent on financial aid from outside. 60 per cent of the state budget and 90 per cent of all public investment were financed through aid. The earthquake further aggravated the situation. The Inter-American Development Bank (IDB) has estimated reconstruction costs at US $ 14 billion; more than twice the country’s gross domestic product.

The economy in the country consists largely of services, trade, agriculture and industry. 40 percent of the population is dependent on the agricultural sector, but which has been severely weakened for several reasons.

Haiti is considered one of the world’s most corrupt countries.

Haiti’s culture has strong West African roots, but is also heavily influenced by the former colonial power of France. This is evident in, among other things, music, literature, language and education system. 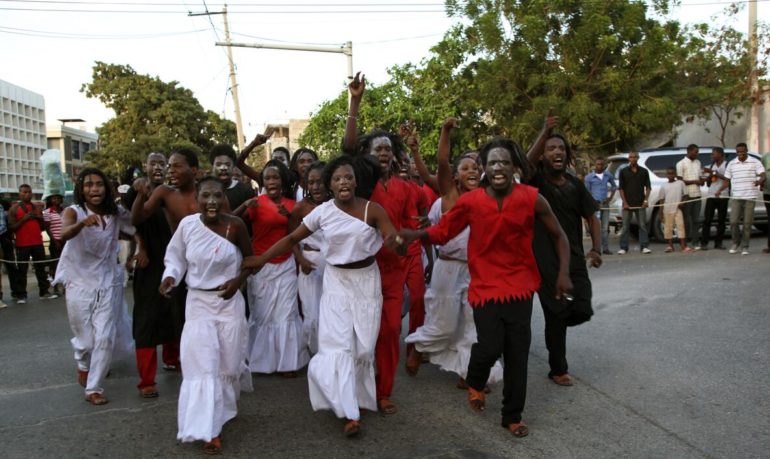 Five years after the 2005 earthquake, students from the public university protested against a failure to rebuild the university. They are dressed up as “living dead”.

After independence in 1804, literature in Haiti was characterized by patriotism and emphasized Haiti’s leadership role in the fight against slavery and colonial powers. Literature after 1950 was also characterized by political conditions, both by the dictatorship of the Duvalier family in Haiti and by the Third World struggle for political and cultural independence. A number of Haiti’s foremost writers have lived in exile for short or long periods for political reasons.

From ancient times, the theater is a popular genre in Haiti. The most famous playwright of the 1980s is Gérard Chenet (born 1927, living in Senegal). In recent decades, several writers have written plays and novels in Creole to make this a full national language. The most notable among them is Frankétienne ( Franck Etienne ).

Haiti’s most famous artist in recent years is Hervé Télémaque (born 1937), a resident of France.

Haiti has two official languages: French and Haitian Creole (one of the Caribbean’s many Creole languages). Since 1979, there has been an official Creole alphabet, while a standard written language is not yet in place. Creole is very important as an oral language in a nation that still has close to 40 percent illiteracy (CIA World Factbook 2015). At the same time, language is very much a living written language. Traditionally, French has been the language of elite, education and administration, while Creole has been the language of the people. According to Haitian linguist Michel DeGraff, 95 percent of Haiti’s population speak only creole. The Haitian Constitution of 1987 also recognizes Creole as the only language that binds all Haitians together. Nevertheless, most of the education is still in French, which means that many children are educated in a language that they themselves – and often also the teacher – do not master. There are projects that work to make the education take place in Creole rather than in French. An example isMiT ‘s creole project, where science education at a variety of schools is carried out exclusively on creole. 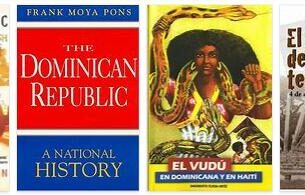 Dominican Republic in the 2010’s