According to a2zgov, Chile is located on the west coast of South America and borders Peru to the north and Bolivia and Argentina to the east. The territory includes the Juan Fernández Islands, Easter Island (Rapa Nui) as well as the Islas de los Desventurados and the Isla Sala y Gómez.

Chile is 4,329 km long and on average 180 km wide, the widest east-west extension is 450 km near Antofagasta. The Andes extend through the whole of Chile up to 6,880 m altitude (Ojos del Salado volcano), towards the sea they descend in stages. The different soil conditions and extreme climatic differences make themselves felt in the population density and in the respective economies of the different regions.

Chile can be divided into five zones. The north consists of rainless hot desert with a few oases. The area south of Copiapó is semi-desert. Most of the inhabitants of Chile live south from Llapel to Concepción. Farms and vineyards characterize this area. The 4th zone between Concepción and Puerto Montt is very forested and has many lakes and rivers; it rains here most of the year. The whole south, from Puerto Montt to Cape Horn, is sparsely populated. Here nature dominates with forests, glaciers, fjords and numerous islands.

Presidential republic since 1925. Constitution of 1981, last amended in 2005. Parliament consists of the Senate (48 seats, 38 elected and 9 members appointed for life by the Supreme Court and the Military Government, as well as 1 former President) and the House of Representatives (120 members). Direct election of the head of state every 4 years. Independent since 1818 (former Spanish colony).

The official language is Spanish. English is common and various Indian languages are spoken.

* If Corpus Christi, St. Peter and Paul and Columbus Day fall on a Saturday or Sunday, the holidays are observed on the following Monday.

* If Corpus Christi, St. Peter and Paul and Columbus Day fall on a Saturday or Sunday, the holidays are observed on the following Monday.

The following articles can be imported into Chile duty-free:

Violations (including an inadvertently undeclared apple in hand luggage) are punishable by heavy fines and imprisonment.

Many hotels and restaurants offer evening entertainment and there are numerous nightclubs and discos. There are casinos in Viña del Mar, Pucón, Puerto Varas and Arica.

Excellent accommodation is available nationwide. Several new luxury hotels have recently opened in Santiago and other cities. They are divided into categories of 5-2 stars. The lack of hotel facilities is made up for by the cozy atmosphere. In rural areas it is more common for the owner or leader to eat with guests. During the main season you should definitely book well in advance in the holiday resorts.

There are tent sites across the country. The official tent sites are expensive, a list is available from the embassy.

Manners: Shake hands to greet you. Most Chileans have two surnames, when salutation and correspondence usually only the first is used. The usual forms of courtesy should be observed. Invitations to private homes are common, and small gifts are welcome.

Clothing: Casual, low-key clothing is widely accepted; Women should not wear shorts outside of the holiday centers.

Tips: Restaurants and bars charge 10% for service. Waiters expect another 10%.

Hot and dry in the north, but very cold and rainy in the extreme south. The central regions have a pleasant, almost Mediterranean climate with a rainy season from May to August. 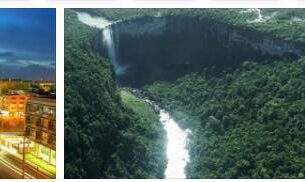 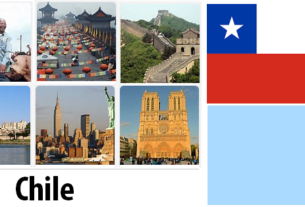