THE POSTWAR PERIOD AND THE BEAT GENERATION

After the Second World War, T. Williams (1911-1983) established themselves with his symbolic theater, obsessed with the theme of sex, violence and decadence, and A. Miller (1915-2005), who tackled issues of human and social commitment in realistic background dramas. The two trends lead to the violent drama, also on the expressive level, of E. Albee (b. 1928), which expresses the psychological and environmental lacerations of the second post-war period. After him the gestural and gestural off-Broadway theater prevails, which has its best-known expression in the Living Theater. Similar developments are noted in the poem. The “confessional” poets oppose the academic lyricism of the Eliotians, who intend to recover both the cultured and traditional poetic forms, and the direct and personal content of a painful life experience. Stand out among these R. Lowell (1917-1977) and J. Berryman (1914-1972), who are inspired by the torn reality of the American world, mediating it through an intense individual expressiveness, which is also found among the poets of the New York school. In the field of fiction M. McCarthy (1912-1989) becomes the greatest observer of society and bourgeois morality. Finally, after World War II there is a revival of Southern writers, from RP Warren (1905-1989) to W. Styron (b.1925-2006), from F. O’Connor (1925-1964) to C. McCullers (1917-1967), from K. Anne Porter (1890-1980) to E. Welty (1909-2001)). There are also narrators of considerable level, such as the Nobel laureate S. Bellow (1915-2005), with his works characterized by a high commitment, human, civil and intellectual, JD Salinger (b.1919), who tackles the problem of juvenile alienation, J. Heller (1923-1999), with his novels (among all we remember Comma 22, 1961) imbued with Jewish humor; and again N. Mailer (1923), B. Malamud (1914-1986), J. Updike (b. 1932). The publication of the poem Howl (1959; Scream) by A. Ginsberg and the novel On the road (1957; Sulla strada) by J. Kerouac, is instead traced back to what has been defined as the beat generation, a movement found on the West Coast, in California and in San Francisco in particular, the homeland of choice. Anarchists, non-conformists and anti-formalists, the beat poets and writers (among which, in addition to the aforementioned Kerouac and Ginsberg, we remember L. Ferlinghetti, Th. Leary and G. Corso) are fiercely averse to consumer society and the type of integration it requires and, on the contrary, are strongly attracted to Eastern mysticism. Among all, the personality who perhaps stood out for the decisive character with which he faced, in his novels, poems and especially in short stories, issues such as sex, marginalization, job dissatisfaction, loneliness is C. Bukowski (1920-1994). United States is a country located in North America according to POLITICSEZINE.COM.

ART. BETWEEN THE OLD AND THE NEW MILLENNIUM

From the end of the seventies American art began to deal with political and social issues. Feminist, anti-imperialist and racial claims press the visual culture and stimulate artists to shape dissent. In this climate, the activism of the Guerilla Girls, an artistic collective that aims to give a voice to women and minorities, is growing; here are also the provocations of artists such as the photographers A. Serrano, who caused a scandal for the use of the crucifix, and R. Mapplethorpe, who caused a real cultural war by portraying male nudes, bodies of women body builders and bdsm subjects. According to thefreegeography, another photographer committed to immortalizing the body and the personal intimate sphere is N. Goldin, who has documented controversial topics such as transsexuality, drug addiction and AIDS with diary-narrative sequences. Important works for contemporary photography are also those of T. Richardson, W. Tillmans, W. Klein and R. Frank. Among the most important names in the contemporary scene are also the sculptors K. Smith, whose works are related to the theme of the vulnerability and perishable nature of the body, and R. Gober, the painters J. Koons and B. McGee, influenced, the latter, from the urban art scene and from the graffiti technique and the installers S. Sze and F. Gonzalez-Torres. The artists of the nineties grew up in an era of crisis to which they resisted with an ironic and lucid gaze, using and mixing different means of expression: video, sound, graphics, installations.

In fact, since the 1990s the video art, already used in the previous twenty years, consolidates itself becoming, in its most varied forms, one of the most present means of expression in contemporary art exhibitions, reviews and events. Among the major video artists we remember M. Barney, N. June Paik and B. Viola. The latter, through the search for the poetic sense of perception and exploring the universal experiences of man, has established himself as one of the most appreciated authors of our times. In the early 2000s, the combination of art and technology was transformed into an increasingly close artistic-conceptual partnership, the main expressions of which are found in New Media Art and Software Art, which bring the debate on the subject to the attention of critics and the public. uniqueness of the artistic product and on the dematerialization of art.

The first cinematographic experiments date back to TA Edison in the USA (one of his engineers in 1893 began the making of some short films), but only after the triumph of the Lumière brothers in Paris did the projections find success. Edison, initially skeptical about the possibilities of the new medium, after the triumph on the national market of French patents, produced with T. Armat, in competition with the Cinématographe dei Lumière, the Vitascope and tried to monopolize the invention. Between the end of the century. XIX and early XX rose the Biograph and Vitagraph of J. Blackton. ES Porter, a former operator of the Edison studios in New York, produced the first feature films and nickelodeons spread throughout the country which contributed to a huge flow of capital into the cinema (thus C. Laemmle, A. Zukor, W. Fox, future Hollywood tycoons). From the point of view of production, cinema in those years had not yet been structured, it was a disorganized world in which the acquired experiences were lacking or very few. Each could now be an actor, now a writer or director; DW Griffith was thus able to establish himself, considered by many historians to be the true inventor of cinema, certainly the one who transformed it from a financial enterprise into a fact of art. Hired by Biograph, a few months after setting foot in a factory he directed his first film, starting a business that, through a very rich production, was to lead him to his masterpieces: The Birth of a Nation (1915; Birth of a nation) and Intolerance (1916), two cornerstones of the history of cinema, destined to make school up to the present day. Meanwhile, the US cinema operations center had moved from New York to Hollywood, thanks again to Griffith who was the first to understand the possibilities of the new settlement where the mildness of the climate was accompanied by a splendid natural setting, built new facilities and opened the first permanent locations (although the birth of the cinematographic city usually dates back to 1913, when CB De Mille made his first major film there). In 1915 in Hollywood, by now an autonomous urban center where the talents and financiers of the cinematographic world converged, the Triangle company was formed between Griffith, Th. H. Ince and M. Sennett. The latter, specialized in the production of comedians, had the merit of sensing the great artistic possibilities of CS Chaplin, the most sensational revelation of a moment in which there were also numerous revelations, which under his direction he interpreted the first films and then came, as director and subject writer of himself, several times to the masterpiece. While Chaplin’s artistic phenomenon matured, Hollywood was decisively embarking on the road of industrialization; alongside less improvisation and greater preparation, the principle of the systematic exploitation of the best-known actors was affirmed. The production studied real long-term industrial programs, grabbed the city markets, then the national ones and, concomitantly with the outbreak of the First World War which had eliminated European competition, rushed to conquer world markets. 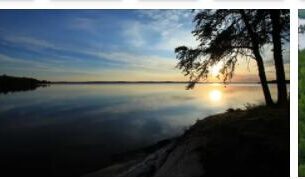 World Heritages in Canada Part I